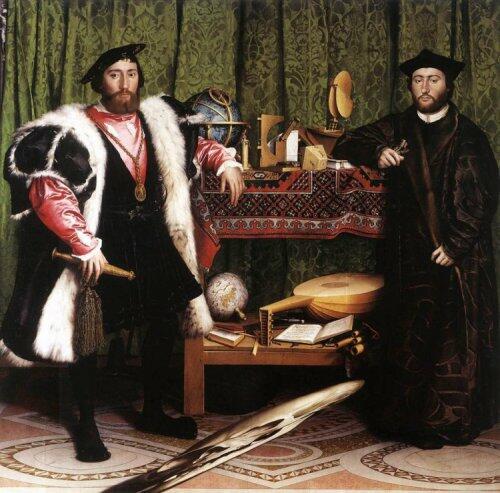 Back in 1533, artist Hans Holbein painted a piece he titled "The Ambassadors." The artwork is a double portrait, as well as a still life.

But there is something even more impressive in it that can only be seen from a certain perspective...

If you stand to the right of the painting, you can see a skull that looks as if it's protruding out of the painting. It serves as a memento mori, or a reminder of death, and many believe it is the artist's way of saying death is always hiding in plain sight.

Experts aren't really sure why the artist put the skull in the piece. Some think the painting was meant for a stairwell so as someone goes up the stairs they see the skull, others feel Holbein split the painting into three levels - the heavens, symbolized by the items on the shelf, the living world and death, and some think he included it just to show off his skills. Whatever the reason, it is pretty impressive.Read more: http://wmmbam.iheart.com/articles/weird-news-104673/1533-painting-has-creepy-optical-illusion-15543066/#ixzz4YD1VHWq8